Above & Beyond are an English electronic music group consisting of Jono Grant, Tony McGuinness, and Paavo Siljamäki.

Grant and Siljamäki met at the University of Westminster. Having discovered a common mutual interest for electronic music, they decided to collaborate in writing music together. Following Siljamäki’s suggestion, they set up the Anjunabeats label in the summer of 1999 with the release of their first single, “Volume One”, under the alias Anjunabeats. Initially, the Anjunabeats record label was founded as a medium to release their own music. Since the label acquired the same name as their production alias, however, they started to release music under different names, most notably as Dirt Devils and Free State.

The original mix of “Volume One”, packaged with their Tease Dub Mix, received immediate attention in various dance clubs and quickly gained support from DJs such as Pete Tong, Paul Oakenfold, Judge Jules, and Paul van Dyk, after Grant and Paavo Siljamäki personally handed a dub plate of the song to Paul Oakenfold in 2000 at Home, the now-defunct London nightclub.

Following the success of “Volume One” and a string of singles and remixes under their Free State and Dirt Devils alter egos, the marketing director & manager of Warner Music Group, Tony McGuinness, was alerted to the duo by his brother, Liam McGuinness. Liam had purchased a sample library that Grant had created for Yamaha and got in touch with Jono.  Having been commissioned to remix Chakra‘s “Home”, Tony McGuinness recruited Grant and Siljamäki to help him complete the remix. When the group was searching for a name to use for their Chakra remix, the inspiration came from a web page belonging to an American motivational trainer coincidentally named Jono Grant. Grant had the poster stuck to his wall. The slogan used by the motivational trainer was “Above & Beyond”, and they decided to use that as their name. Although the group was relatively unknown at the time, their remix of Chakra’s “Home” was picked over remixes by Rob Searle and Tilt to be the A-side mix, and, after plays by Pete Tong on BBC Radio 1, it reached number one in the UK club charts.

In addition to Above & Beyond’s production work, the trio also established the vocal trance group OceanLab with Justine Suissa. 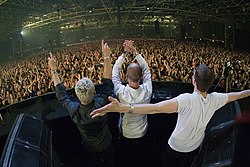 The first single to be heard from Above & Beyond’s second artist album, Group Therapy, was “Thing Called Love”, featuring vocals from Richard Bedford. It is featured in the Anjunabeats Volume 8 compilation album released on 19 July 2010. After months of writing, refining, and perfecting, the hugely anticipated album Group Therapy was released to widespread critical acclaim on 6 June 2011. Hitting No. 1 in the iTunes Dance Album charts, the album was also hugely well received by the dance music press. DJ Magazine put the three members of Above & Beyond on the cover of their May issue, describing them as the “biggest DJ/production collective the UK has ever produced.”  Mixmag hailed the album as “Artist Album of the Year”. The album contains downtempo moments, such as the classical piano-influenced opening track “Filmic” and the reflective “Only a Few Things”, featuring Zoë Johnston, as well as more uptempo club tracks such as “Sun & Moon”, “Thing Called Love”, and “Prelude”. All songs are written and produced by Above & Beyond, with Richard Bedford and Zoë Johnston providing vocals.

The first official radio single from the album, “Sun & Moon”, featuring vocals from Richard Bedford, became a favorite of BBC Radio 1 personality Vernon Kay and ended up on the station’s B-List, an achievement that was also followed by their second radio single, “Thing Called Love”, which also featured Richard Bedford.  In 2017, Billboard named “Sun & Moon” the number-one saddest dance music song of all-time. 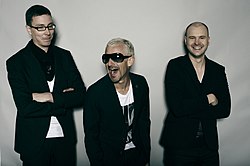 In 2012, Above & Beyond embarked on its Group Therapy World Tour, performing sold-out shows at select venues and clubs across North America, Europe, Asia and Australia.

The group also made their debut in Hawaii, performing at the Kaka’ako Waterfront Park in Honolulu. In August 2012, Above & Beyond appeared on the cover of Mixmag and performed a live set at Mixmag Headquarters along with Mat Zo. The 2-hour set was subsequently released as an exclusive label showcase mix titled United Colours of Anjunabeats.

In 2013, Above & Beyond continued to headline and perform at several dance music festivals, including Ultra Music Festival, Electric Daisy Carnival, Electric Forest,Tomorrowland and Stereosonic.

The group also performed their first-ever acoustic shows at Porchester Hall in London and The Greek Theater in Los Angeles, featuring Zoë Johnston, Alex Vargas and Annie Drury, among other special guests including Skrillex. On 26 October 2013, Above & Beyond celebrated Episode 050 of Group Therapy Radio (their 500th radio show overall) at Alexandra Palace in London with a live 6-hour broadcast.

On 18 October 2014, Above & Beyond celebrated Episode 100 of Group Therapy Radio at Madison Square Garden in New York City with a live broadcast. Ilan Bluestone opened the show, followed by Andrew Bayer and Mat Zo, respectively. Above & Beyond then took the stage and performed a 2-hour set. During the set, they debuted new music from their up-and-coming album We Are All We Need

The previous day, 17 October, Above & Beyond had debuted the new video for the title track of We Are All We Need in Time Square. They narrowly missed arrest when, after inviting fans to come out and view the video, hundreds turned out in droves.

Police on horseback were summoned to the location, as traffic was beginning to become blocked.

Ori’s weekly Uplifting Only radio podcast, which aims to be the definitive and leading show for the orchestral uplifting genre, has developed a devoted and passionate fan base.